you're never too old for fun

I know this is a very controversial post, but talking about racism is something I’ve become quite passionate about.

I’m by no means an expert on what is ‘politically correct’, but I’m not a bad person and I know right from wrong.

Those not the same race as you are the ‘racist’ ones?!

I remember turning down someone in a club after speaking to them for a while and learning about where they’re from, simply because I have a boyfriend, and I got accused of being racist. I was recalling this story to my colleagues at work the next day, and this got us talking about racism around the world.

A colleague at work, who has become a close friend was born in England, but his heritage is from India.
He told me that he nor anyone he knows have experienced a racist attack, other than from someone of his own race.

He advised me that in his culture there is a class system based on your surname and also how light your skin colour is.
Apparently in India there are adverts like the one below, where the lighter your skin colour, the more ‘fortunate’ you are. 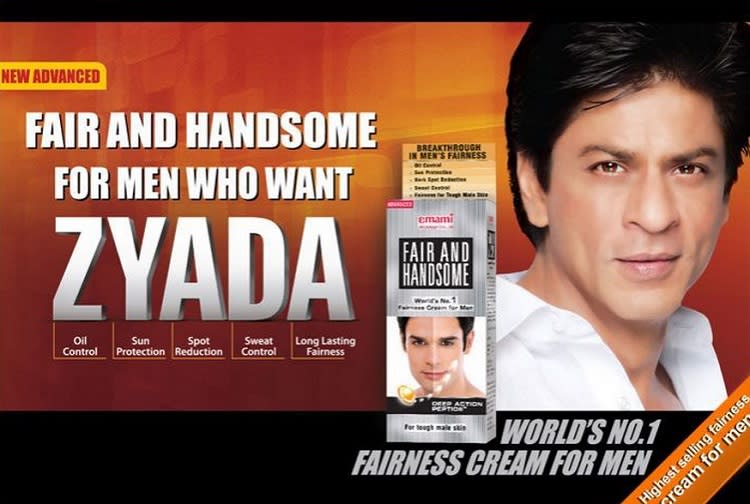 According to my friend, this is a moisturiser where it claims to lighten your skin colour – making you as desirable as Bollywood actors.

This did have me thinking – if in England I can get accused of being a racist to someone from India, for no reason other than turning them down in a club – then how is it acceptable for adverts like the one above to be allowed?! Who is the racist here…?

Facts and figures with surprising results

One of my friends called Gbenga was born in England, but has a Nigerian origin.
I remember when I first met him, he asked me where I was from and I became nervous because all I thought was  “I can’t ask him the same question because he is black and I don’t want to be racist”.

I remember telling a manager where I sit and who I sit next too, and when asked what Gbenga looked like I froze. How could I describe him without bringing his colour into the conversation?!

I wouldn’t describe myself as a racist. I’m going to give the ‘typical white girl’ response:

“I have an uncle who’s mixed race and have friends of different origins.”

But being in this situation and talking to different colleagues about their background did make me wonder – am I a racist?!

I truly believed that I was a racist because when asked to describe someone, I thought you couldn’t describe someone by the colour of their skin – and this is what I’d bee doing!

Firstly it’s okay to describe someone on how they look. White people are described as just that – a white person. I don’t find this offensive and I’ve only just come to realise why…

According to Gbenga, describing someone by the colour of their skin doesn’t make you a racist.

Making a hateful or derogatory comment about someone based on the colour of their skin does. Being disrespectful or hateful based on this is racist.

I didn’t know if it was socially and politically acceptable to address this around others though, and I didn’t know if Gbenga was just saying this because he knew my intentions would never be to hurt someone.

I decided to ask my auntie. My auntie married a mixed-race man called Carl.

I asked my auntie how she describes Carl to other people who wonder what her husband is like and she said “Tall, slim, dark-skinned, dark hair, funny…”

It did make me think – if my auntie describes her husband without hesitating to mention the colour of his skin – is it okay for others to do so?

I was brutally honest and just explained to her that I’m interested in knowing what I can and cannot say.

Her reply was simple, but one that I think works in ANY situation:

“Does the comment you’re about to make add anything to the conversation?”

How brilliant is that.

So simple but so effective it can work for anything.

I replied “..but how did you mentioning Carl’s skin colour make a difference to our conversation?”

She simply answered “You asked how I described him – so in order for you to get a mental picture the colour of his skin was important.”

My partner is Greek and his sister is at Uni – struggling to find a placement because it’s often about who you know and not what you know.

She is extremely intelligent with A grades throughout her schooling, but the only help her Uni give to find a placement is for minority students only.

She is fuming about the fact she’s stuck trying to find somewhere, when help is out there for others.

I can understand where she is coming from. Minority programmes are there to make sure workplaces are equal.

But how is it equal to have a programme that not every race can join if they need help?!

I told my friend Gbenga about my view on minority programmes and how they’re unfair on those who aren’t considered ‘a minority’.

His reply was one that I’d never even thought of:
“Slavery only ended a few hundred years ago, meaning that those like me – with heritage from Africa – had to start from scratch from this date. My ancestors had nothing to start with and had to build a life for themselves from this period in time; whereas your ancestors probably already had homes and jobs – they’d already built their money. This means that I’m automatically more disadvantaged than you.”

I pondered over his statement for a while, and to be honest I didn’t have much to come back with. How can I disagree with his opinion?!

But the fact it seemed Gbenga and his family still hold this opinion, means that their opinion of “white English people” is detrimented because of this.

Although this thought bothered me, I couldn’t be a hypocrite as I form my own opinions of some people of a different race also…

For example, when I walk home from work I’ve stopped going down an alley – although clearly lit – as it became a place where black boys and girls would meet up and I felt intimidated.
The reason why I felt intimidated was slightly because a group of teenagers is intimidating, but also because on the news you always hear stories of groups of people – especially those who are black – attacking or mugging people.

It’s a terrible thought to have, but I’d be lying if this is one of the reasons as to why I stopped going home that way.

There are a lot of unanswered questions about racism and it tends to be a topic that automatically leads to a debate:

“What is politically right and wrong?”

“How do you know if you’ve made a racist comment if you’re essentially told you can’t say anything about a persons colour?”

“You voted Brexit so you must be a racist…”

Unfortunately in today’s society there are constant mixed messages being thrown about in regards to what you can and cannot say without causing offence.

There also seems to be a little hostility towards different races and I don’t know if this is because people – like myself – are worried about offending somebody, or if people are just plain rude and hold a grudge to those who hold a different skin colour than them.

All I know is I think it’s great that England is becoming more diverse. It means we’re all able to learn about different cultures and better ourselves.

I know that I’m not racist. I’d never be hateful to anyone based on the colour of their skin. It’s the way you treat me that forms my opinion on you.

Skin colour is only something little about a person. There’s so much more to someone than the colour of their skin. If you make a hateful comment to someone just because they are a different race than you, then you are a racist and you’re incredibly narrow-minded. Everyone is equal and that is how it should be.

I’m sincerely sorry if any of my comments and views have offended anyone, I have had this proof read by numerous different ethnic groups to make sure my comments aren’t offensive – but I’m trying to be as real as possible and get through my opinion and viewpoint – as sometimes a ’20 something’ woman’s opinion is overlooked when it comes to such strong topics.

Please let me know your views.

Here’s to 2020 🥂 The past year I’ve stepped outside my comfort zone, and plan to do the same next year 🤞🏻 May your 2020 be full of taking risks, and doing what makes YOU happy. I’m excited to start 12 new chapters 🥳✨
Lovely time in The Big Apple with @ncharalambous15 and his gorgeous family 💕 🗽
It’s beginning to look a lot like Christmas 🎄 🎅🏼 @ncharalambous15
Dinner and drinks with my bestie @claudiamusk 💓 how can she look this good less than 5 months after having a baby 😩
Lovely little catch up with a gorgeous mummy and a gorgeous baby. My favourite little person 💕
Happy 25th birthday @ncharalambous15 🎁🎉 can’t believe you’re now “mid-20’s” 🧓🏽but you should be proud of everything you’ve achieved so far! Love you xxx

I'm going to the following events, please let me know if you're attending so I can meet you personally :)